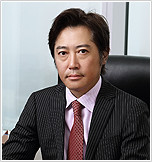 JK Holdings is a pure holding company that develops 66 housing-related companies (as of March 31, 2016) under its group banner with Japan Kenzai, a wholesaler of building materials for housing, as its core company. Established in 1937, the company will be welcoming its 75th anniversary in 2012. Among the basic industries of “food, clothing, and housing”, the housing industry, which is the most lagging, still has plenty of room to develop in the future. With a principle of "creating a home environment more comfortable and rich," we at JK Group are actively working on every aspect related to home living.

Currently, many Chinese products and Southeast Asian products are coming into Japan, and this movement is expected to strengthen further. JK Holdings began preparations for business in China five years ago; already, we are increasing the number of employees who can speak Chinese by sending over ten employees to schools in China to study the language, so we have a large number of skilled employees who are capable of working in China.

The size of the Chinese market is extraordinarily large with 4 to 5 million homes believed to be constructed annually. With 70 years of experience in Japan, we are aiming to enter the Chinese sales market in the near future using the various channels of our group.